How Race and Gender Are Shaping Politics

Originally from Kannapolis, North Carolina, Kerry L. Haynie is Associate Professor of Political Science and African & African American Studies at Duke University. His latest book is Race, Gender, and Political Representation: Toward a More Intersectional Approach, with coauthors Beth Reingold and Kirsten Widner. With the most diverse U.S. Congress to date currently in office, Duke Faculty Advancement asked him to share insights from his research and describe his latest project. Below are excerpts from our conversation.

Women of Color as Legislators 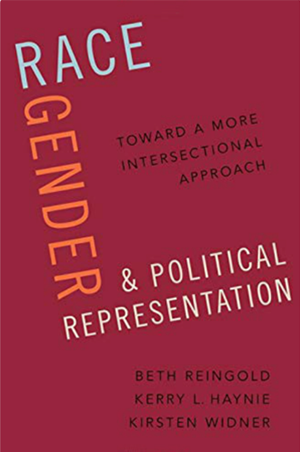 “I was working with a colleague who was working on women and legislators, and we decided to do a joint project. We published a piece early in our careers looking at the role of race and gender and representation; before that time, the conventional thinking was that race and gender didn’t matter that much in terms of how legislators did their job or what institutions produce.

“The absence of women and people of color has led to policies that limit the opportunity for those folks out in the real world. Gender and race have been a negative characteristic in terms of outcomes opportunities. Black women and Latinas share both of these characteristics. They have been at the margins of politics and our society in any number of ways. My research suggests that because of their lived experiences, they [as legislators] tend to pay more attention to issues of poverty, inequality, healthcare and education than do other legislators.

“Criminal justice is another where we see women of color representing differently. Black women will be tough in terms of punishing crime, but in the same legislation they’ll include provisions that provide some services to the perpetrators of crime. For example, they’ll say, you committed this crime, you should go to jail. But while you are in jail, you should also get a GED or get drug treatment or some other kinds of psychological or medical treatment.”

Looking Beyond the ‘Year of the Woman’

“In the book, we critique single-axis approaches to the study of representation that render the positions and perspectives of White women and men as normative and definitive. Single-axis studies consider race and consider gender, but not the intersection of the two. My coauthors and I believe these single-axis approaches are overly simplistic and that scholars should think about and study representation as not only raced, and not only gendered, but race-gendered.

Over the last 20 or 30 years in politics, there have been headlines in the news proclaiming the year of the woman, meaning there were record numbers of women running for and winning office in a particular election cycle. If you look closely, these data, as reported, assume that all women are White.

“One of the things [we emphasize in the book] is to think about representation in a multifaceted way. If you take an intersectional analytical approach like my coauthors and I do, you find that the so-called years of the woman have been women of color-driven – the increase in turnout among women is because of the increase in turnout among women of color, and the growth in women in public office is because there have been more Black women and Latinas involved.”

Race and Politics in the South

“Having grown up in North Carolina, I’m especially interested in race and politics in the South. For political scientists, most of what we know about the American South is from studies that were done more than 50 years ago, and the most recent major study of race relations and racial attitudes in the South was published in 1966. So, an interdisciplinary group of Duke faculty and graduate students are engaged in a series of projects in which we’re revisiting, and in some cases, replicating some of these classic studies. We are asking some of the same questions found in those studies, and we are asking some new ones as well. We are interested in knowing whether what those studies suggest still holds today.

“One reason we are asking new questions is because the South has changed dramatically since the l960s, One of the most notable changes has been the increase in the Latino population all over the South, and in the most recent national election, that showed up [to vote].

“If you go look at what happened in Georgia, for example, part of the explanation for the Democrats flipping Georgia from red to blue is the increase in the Latino population and other minorities as well. In 1966, it was a Black/White story. [Now it is] much more complicated; even American Indians and Southeast Asians are politically significant for elections in Georgia, and North Carolina as well. This shift in Georgia, Texas and other places in the South is changing the dynamics of racial politics. It’s no longer a Black/White story.”

“Just before the pandemic hit I was starting to make some progress on a North Carolina-centered race and politics project. This project is an effort to document and understand how elementary and secondary school texts treat matters of race. I have acquired copies of more than 50 social studies and history textbooks that were approved for use in public schools by the North Carolina Department of Education.

“Some of these books date back to the 1940s. It will be interesting to see what North Carolina students were taught about a variety of subjects including slavery, the Confederacy, Jim Crow, the coup in Wilmington and the Civil Rights Movement.”

Learn more about the book and read the authors’ article in the Washington Post.

See the new faculty projects for Reckoning with Race, Racism and the History of the American South, including Race, Social Movements and Political Participation in the New South (John Aldrich, Kerry Haynie, Ashley Jardina and Don Taylor).